Offering a variety of female classes, ranging from Girl’s 51cc to Schoolgirl and Collegegirl, Freestone Mx offers the biggest event of the year in Women’s Motocross. The event brings out girls from around the country with all the top talent including Jazzmyn Canfield, Jordan Jarvis, Shelby Benson, Kylie Faschnant, Kaitlyn Morrow, Marissa Markleon and Hannah Hodges to name a few. To make the event even more prestigious, the WMX raced as well to end the week on Saturday with timed qualifying practice and two 15 minutes motos. While there were many epic battles throughout the nine different female classes that decided the champions, here are the few that rose above the rest.

We have heard the names, we have seen the battles, and the Women’s Cup was no exception. These two found themselves together on the track almost every moto, swapping moto wins and both clinching titles.

In the second moto of the Women’s +14, Jazzmyn Canfield pulled a holeshot and gain an early led trailed closely by Jordan Jarvis who would try everything she could to get around the holeshot winner, but she could not make it stick. Unfortunately, due to a crash in the first moto, Canfield would go 7-1 for a third overall giving Jarvis a 1-2 and the overall championship.

That would not stop the two as they went into the second moto of the Schoolgirl class. Jamie Astudillo would grab the holeshot, but Jarvis and Canfield would both make the pass on Astudillo to battle it out for the championship. Jazzmyn eventually was able to make the pass on Jordan, but laid it over in a corner allowing Jarvis to pull away and take the championship.

Coming into the last moto of the Girls Sr., Jarvis had claimed two championships leaving Canfield with one more chance to get the job done. Canfield would pull another holeshot and get out early, but Jarvis put a hard charge in late in the moto to chase the leader down. Both Yamaha riders would once again fight it out to the finish with Canfield taking the win and the championship.

Though, the two were not the only ones swapping motos.

Then there were four…

With talent so deep in the Women Classes, it came as no surprise to see a four way battle for third place in the Women’s +14 Amateur Class. Samantha Mandelke, Maddie Jo Taylor, Brooke Whipple and Aspen Neely seemed to chase each other all week. Taylor would make passes toward the front and onto the podium, but would suffer a scary crash toward the end of Moto 2. This led Neely and Mandelke in the hunt for a spot on the podium. Neely would get out front first, but Mandelke would charge from behind eventually make a few passes going 4-3 for a second overall. Brooke Whipple, who claimed a third places in the first moto would have some mishaps, leaving her with a 3-15. 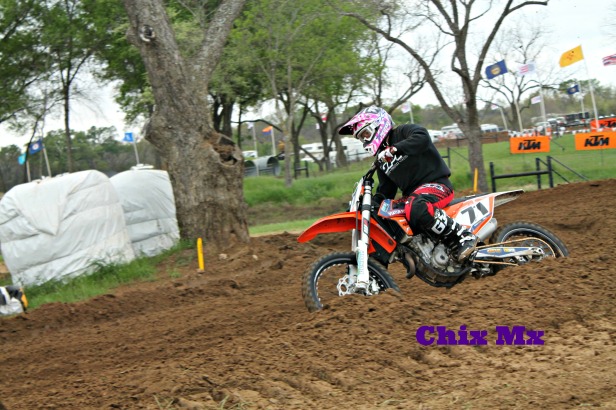 Going into the second moto of the Collegegirl, Whipple, Neely, and Mandelke all had a chance at claiming the championship. Neely would pull the holeshot but have a first lap crash, which tossed her out of the championship hunt. Mandelke, who finished a third the first moto, would get out front early and check out with Whipple in second. Toward the end of the moto, Whipple would go down giving Mandelke the championship and leaving her with a second overall.

If there were any doubt or hesitation in Hannah Hodges ability on the big bike, may it rest in peace. Suffering from a bad start in moto one, Hodges pushed her Kawasaki toward the front taking her first WMX win. She would go on to pull a holeshot in moto 2 and check out on the field, winning the moto and overall with a 1-1 on the day. 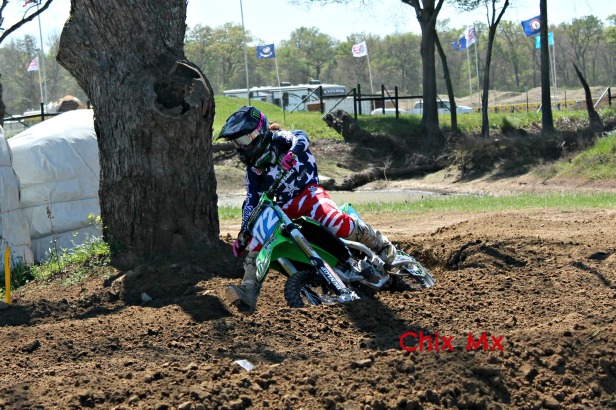 Hodges did not compete in the first round of the WMX at Daytona, due to a crash in a Men’s B class, where she was sitting in the top 5. Taking the first round off didn’t seem to faze the young rider heading into round two at Freestone.

While there was a lot of great races, there were many great rides as well..

Katie Benson would take the championship in the Girls Jr. class, but after suffering from a first moto crash in the Girls Sr., she decided to sit out on her second moto and heal up. There is no doubt that this girl has the ability to pull of championships. With the many riders coming through the ranks, Benson is one to watch. With a great family and blistering speed, she will claim many more championships throughout her career. 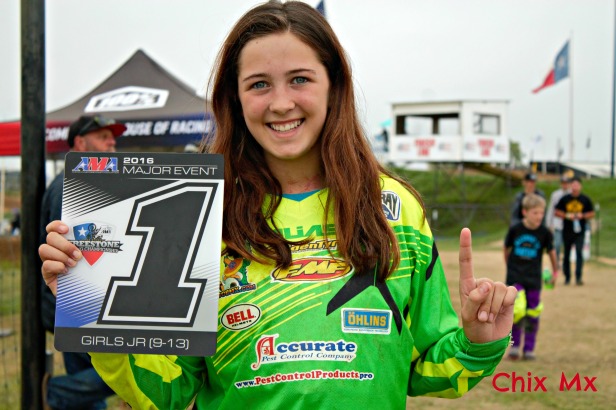 Hayzley Freeman would clinch the title in the Girl’s 65cc class. The Florida rider would go 1-1 and take home the championship followed by Corinthia Crawford in the second place and Kyleigh Stallings in third.

Taylor Higgins suffered a crash earlier in the week leaving her with a dislocated and broken shoulder along with an injury to the leg. From the looks of her social media, the prognosis is good, and she hopes to be back soon. Heal up soon Taylor!